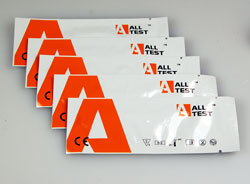 Just a quick post to let you know that we have more sensitive Cannabis urine THC drug testing strips in stock now that detect just 25g of THC compared with the standard test kits kits that detect 50g.

The lower sensitivity allows the test to detect smaller or lower levels of THC in the urine and extends the window after use of cannabis that a urine test will show its use.

For years the urine cut off levels have been set at 50g, and while this level is proven not to show after passive inhalation, the new lower test will be of interest to users wishing to screen for all exposure to the drug, not just direct use.

The procedure for running test is identical as the format of the strip tests has not changed. Simple dip one of the strips into a freshly collected urine sample and read the result at 5 minutes. A positive result indicates Cannabis + cannabis metabolites are in the sample at concentrations of 25g or above. 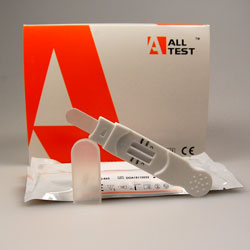 Simpler, easier to use and with all the accuracy of its larger combination brothers, the DSD-843 is placed directly into the mouth and absorbs saliva directly. The test can be seen running while still in the mouth, and when the pink dye is visible in the results window the test can be removed and placed back in its cover to complete running.

No saliva transfer. no collection or processing. This test literally runs itself and give 4 clear results, 1 for each of the screened drugs.

A lot of people asked for a saliva drug test just for Cannabis and Cocaine, adding Amphetamine (Speed) and Opiates (heroin, morphine codeine) made sense, did not increase the cost of the panel greatly and expands the market for the test.

We think this drug test is going to prove very popular with buyers wanting an entry level saliva drug test which is easy to use and reliable. It may also have a place in workplace drug screening where Benzodiazepines are not considered an issue.

6-MAM is a specific metabolite of heroin. Its detection in urine indicates heroin as has been consumed recently. It is not detectable if codeine or morphine have been taken, so no false positives with legally taken opiate based pain killers and analgesics.

UK Drug Testing are offering the membrane as part of its new 7 panel workplace and employment screening drug test. Having to confirm positive MOP and OPI urine tests, which occur when workers have taken low dose codeine pain killers, is an expensive and time consuming business. Even the best laboratory confirmation drug testing services can take 72hrs to process a sample, meaning key workers can remain unavailable for up to a week after a positive on site drug screen. The new 7 panel employment drug test with 6-MAM means that heroin use is being screened for directly and specifically, avoiding these problems.

The development of an accurate and reliable 6-MAM drug test kit during 2015 allows the test to be commercially released as a single test membrane and as part of multi-panel combination drug test kits from 2016.

We predict that 6-MAM drug tests will gradually replace most opiate drug screening, in pre-employment and non safety critical employment environments, as companies come to appreciate the specificity of the test, and potential cost savings associated with moving towards 6-MAM as the heroin screen of choice.

Where high dose codeine and morphine sedation in the workplace remain a safety issue MOP 300g and OPI 2000g membranes will continue to be advisable.

6-MAM screening also has a key role in healthcare drug screening, particularly in treatment environments where co-prescription of codeine and other opiate drugs have traditionally masked continued heroin, use making point of care testing problematic. 6-MAM drug testing enables an immediate test for compliance for the very first time.

The new 6-MAM membrane is looking very selective with few cross reactivity issues, and good stability to oxidants and other adulterants. There is no cross reactivity with Methadone,  Buprenorphine, Tramadol or Oxycodone so false positives with the 6 MAM drug test membranes should be minimal.